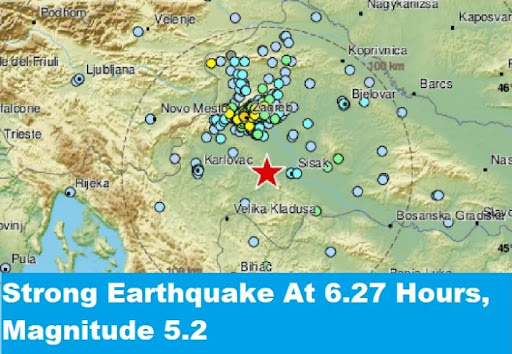 Source:  https://etrendsnews.com/2020/12/28/strong-earthquake/ This is the second strong earthquake to shake the Balkans this year. A magnitude 6.0 earthquake hit at least one person, injured dozens, destroyed several buildings in Zagreb, and left part of the capital without electricity. Strong Earthquake: A  strong earthquake at 6.27 hours shook central Croatia , and as reported by the EMSC, its strength was 5.2. The epicenter is  51 kilometers southeast of Zagreb , right next to Strašnik near Petrinja, at a depth of 5 kilometers. The quake was felt in almost all of  central Croatia ,  lasting longer than the one on March 22 this year. Interestingly, the one was at 6.24 am, and this one three minutes later. DARKO DUMBOVIĆ, the mayor of Petrinja, said that there was   earthquake damage  in the city. “We were hit by a  strong earthquake , I never experienced this. I don’t know if there are any victims, there are material damages “, said Dumbović for H1. Read More:  Active as “Luke Har
Post a Comment
Read more